The idea to transition the Glynn Country Animal Control from a high kill facility to a No Kill Shelter came from a series of very dedicated volunteers. As noted in this article by Tracey Durning, a co-founder of The Target Zero Institute, this effort has been challenging but the foundation has now been laid.

Collaborating to Zero:  Not Always A Cakewalk but Critical to Success.

This movement began in 2004 by Nathan Winograd, a Stanford Law School graduate & former criminal prosecutor with the first transition shelter. As of 2013, there are hundreds of shelters nationwide who have transitioned or are transitioning, we believe Glynn County Animal Control can be "No Kill."

This concept requires education first, buy-in, and then commitment from the County via The Glynn County Board of Commissioners. See NO KILL 101 below for details on the steps required to transition a shelter to a humane, sustainable, cost-effective model that works hand in hand with public health and safety, while fulfilling a fiscal responsibility to taxpayers. Simply put, over time, this approach is less expensive than the traditional approach.  With a strong spay & neuter program to stabilize animal reproduction, over time, resources can be shifted from warehousing and euthanasia to education, adoptions, and support to responsible, loving pet owners who might need financial assistance to keep their animals.  The statement that there are more animals than homes that want them is a myth that statistics do not support.

Pyramid Program. Getting to Zero with Proven Practices.

Target Zero teaches Fellows the Pyramid Program, a proven systematic building of programs and policies to get to zero (90+% shelter save rate). Each level of the pyramid is designed to build upon the other to refine policies, reduce animal intake and ultimately increase the live release rate.
What does NO Kill mean…

In the last decade and a half, several shelters in numerous communities have comprehensively implemented a bold series of programs and services to reduce birthrates, increase placements, and keep animals with their responsible caretakers. As a result, they are achieving unprecedented results, saving upwards of 99 percent of all impounded animals in open admission animal control facilities. Some of these communities are urban, others rural, some are politically liberal, and others are very conservative. Some are in municipalities with high per capita incomes, and others are in those known for high rates of poverty. These communities share very little demographically. What they do share is leadership at their shelters who have comprehensively implemented a key series of programs and services, collectively referred to as the “No Kill Equation.”

Many of the programs identified below as key components of saving lives are more cost-effective than killing animals. 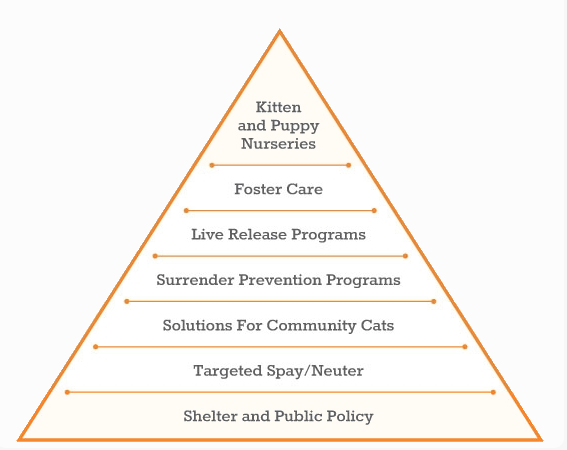 Today, No Kill is a humane, sustainable, cost-effective model

that works hand in hand with

public health and safety, while fulfilling a fiscal responsibility to taxpayers. 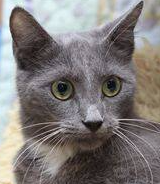 Gean
﻿
It is simply more cost effective than impounding, warehousing, and the killing animals. Between philanthropy, use of rescue groups, use of volunteers, and revenue producing ventures like adoptions, neutering rather than killing feral cats, are simple less expensive, with exponential savings in terms of reducing births.

Data shows that every year there are six times more people looking to acquire an animal than there are animals being killed in shelters.

No Kill is simply not achievable without rigorous implementation of these programs. They provide the only model that ever created No Kill communities. It is up to us in the humane movement to demand them of our local shelters, and no longer to settle for the excuses that shelters often put up in order to avoid implementing them.

Shelter & Public Policy combined with  leadership within the facility.
The most important element in No Kill Equation, without which all other elements are thwarted — is the combination of a hard working, compassionate animal control or shelter director not content to continue killing, while regurgitating tired clichés about “public irresponsibility” or hiding behind the myth of “too many animals, not enough homes.”  However, nothing can be achieved with the appropriate local ordinances and state laws laying the foundation that can help communities achieve a 90+% shelter save rate of homeless animals with cost effective programs. Thoughtful legislation that automatically directs funding to programs proven to decrease shelter intake is the first step.

Updating or changing local ordinances is a laborious and time consuming process by definition, but the impact those changes can make is directly related to lives saved. For example, the return-to-owner rate is higher in cities with licensing requirements. Involving all stakeholders, shelters, animal welfare advocates and elected officials in ordinance updates is paramount to developing the most practical life saving laws, especially those that can be controversial.

Deferring community cats that would otherwise enter a public shelter and face certain euthanasia, as well as spay/neuter return programs, will drastically and immediately decrease shelter intake and thus shelter deaths. There are 240 local governments that now support Trap-Neuter-Return.

Public-private partnerships are proving that shared resources can lead to major results, with Jacksonville, Florida being a prime example of that. Leaders of their Humane Society, Animal Control and the First Coast No More Homeless Pets spay/neuter clinic joined forces and through their collaboration have increased the shelter save rate from 32% in 2002 to over 87% in 2013. Public and shelter policies lay the foundation for successful programs that decrease intake and increase the number of animals saved.

Public policies that are conducive to life saving programs should also include:

Surrender Prevention Programs:  Keeping animals out of shelters.
Historically, open admission animal shelters have admitted all strays and owner surrenders with no thought put into alternatives. Shelters have accepted the task of placing homeless animals only to become overwhelmed with crowding, disease and high euthanasia rates.

Today, that trend is starting to change. We now know that the majority of shelter pets are surrendered by low-income owners who would take advantage of services if they were financially feasible.

In general, Surrender Prevention has two parts. The first and ideal is reaching those pet owners in the community who may surrender in the future, educating them and providing practical resources to proactively prevent relinquishment. The second is to have key staff in the shelter receiving office working with pet owners who want to keep their pets, but need some sort of assistance.

The Humane Society of the United States ﻿Pets for Life Program﻿ focuses on underserved communities and the premise that most owners love their pets but simply do not have the resources to care properly for them. The Pets for Life model bridges the gap between needed services and low-income pet owners by recruiting volunteers in those neighborhoods and hosting large scale vaccine and dog training clinics. Each clinic is used as an opportunity to build relationships, educate and ultimately lead those owners to utilize subsidized spay/neuter and other services, thus decreasing shelter intake in the long run.

But you don’ t have to operate a national organization to host large scale events. Volunteer veterinarians can be recruited to help with vaccine clinics, along with dog trainers to accomplish the same goal in underserved areas in your community. Sponsors may include drug companies or food manufacturers to cover costs.

Targeted Spay/Neuter & Trap-Neuter-R﻿﻿﻿el﻿﻿﻿ease (TNR) programs for free-living cats allow shelters to reduce death rates and to reduce the astronomical reproduction rates of unfettered cats. The focus is to target assistance where it is needed most. Read more here.

Rates of reproduction for non-altered cats & dogs over 7 years. 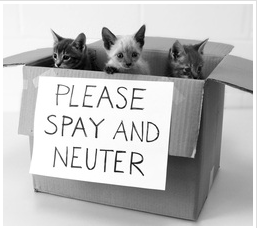 ﻿﻿﻿﻿﻿﻿﻿
﻿﻿﻿Rehabilitation &﻿﻿﻿ foster care.
It takes a village to reach a 90+% shelter save rate in a community. Shelter staff and rescue groups are overwhelmed with the number of homeless animals that need care. Recruiting foster volunteers in the community is a logical extension of life-saving efforts. An organization should be advertising this need in every way possible for foster volunteers who can temporarily care for, then place, shelter pets.

Though a well run volunteer foster program needs staff oversight, many are heavily managed by trusted volunteers. Once key organizers are in place and pathway planning is a well-oiled machine, fosters can be moved into temporary homes the day they enter the shelter.

An effective foster program should have two major goals:

1. Have enough foster homes so that volunteers are ready even before potential foster candidates enter the shelter. When a surrender cannot be avoided, the next best thing is to decrease an animal's length of stay so they are not exposed to infectious diseases and a stressful, unfamiliar environment. The ultimate plan is placement before the pet enters the shelter.

2. Share the responsibility with and empower foster volunteers to place their foster pets in permanent homes. If a shelter is not managing foster animals in this way, they are doubling the category of intake when those foster pets are returned to the shelter for adoption.


Kitten & puppy nurseries.
Saving all neonatal puppies and kittens entering shelters is both an obstacle and an opportunity to reach a 90+% shelter save rate. Litters entering the shelter with their nursing mother lighten the workload otherwise placed on staff and volunteers, however keeping them in the general population exposes them to a myriad of infectious diseases and is typically a stressful atmosphere. Off-site foster care is a great option when available, but what if it isn’t available? Finding foster families to bottle feed is no doubt the most difficult volunteer pool to recruit.

Enter the innovative idea of Kitten and Puppy Nurseries. Because cats reproduce at a much higher rate than dogs, Kitten Nurseries are more common, especially during kitten season, but these same principles can apply.

The Kitten University Handbook was developed by the Jacksonville Humane Society and the UC Davis School of Veterinary Medicine. A collaboration between Jacksonville Animal Care and Control and First Coast No More Homeless Pets led to the opening of a kitten nursery in April 2012. Ensuring that staff and volunteers are educated and trained about neonatal kitten care is essential to saving as many of them as possible. Kittens, in particular, are fragile and without their moms need around-the-clock care.

Ironically, the San Diego Humane Society and SPCA found that nursing kittens without their moms experience less upper respiratory infections and had a greater chance of survival than the kittens surrendered with their moms. The kittens are separated and cared for according to their age; 0-2 weeks, 2-4 weeks and 4-8 weeks. Sending them to a foster family any time during their stay is always a goal in an effort to make room for more.  At Austin Pets Alive, staff designed a Bottle Baby Program around wildlife rehabilitation principles, while proving that you don’t have to have space in your shelter to have a successful nursery. An airstream trailer serves as the nursery and since 95% of the program is operated by volunteers, a lock box and key allows for 24-hour access. Formal protocols, training and education are vital for success.  Read more here.